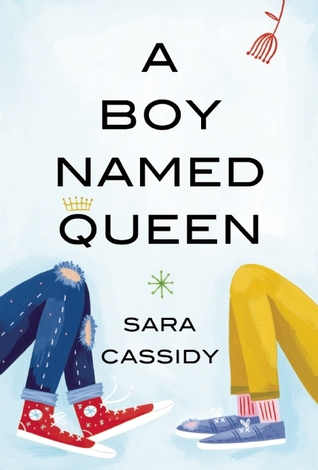 Evelyn is an only child with a strict routine and an even stricter mother. And yet in her quiet way she notices things. She takes particular notice of this boy named Queen. The way the bullies don’t seem to faze him. The way he seems to live by his own rules. When it turns out that they take the same route home from school, Evelyn and Queen become friends, almost against Evelyn’s better judgment.

When she receives a last-minute invitation to his birthday party, she knows she must somehow persuade her mother to let her go, even if it means ignoring the No Gifts request and shopping for what her mother considers to be an appropriate gift, appropriately wrapped with “boy” wrapping paper. Her visit to Queen’s house opens Evelyn’s eyes to a whole new world. And when it comes time for her to take something to school for Hype and Share, Evelyn suddenly looks at her chosen offering — her mother’s antique cream jug — and sees new and marvelous possibilities.

This is a tiny book with a lot of heart. Cassidy has written in under 100 pages what some novels are unable to do in 300. A Boy Named Queen is a story of gender, a story of expression, and a story of nonconformity on a number of levels. Though it is a powerful book, even in its brevity, I wish it had been longer, and that readers would have more of an opportunity to get to know Queen and his family.

That being said, I really do love this book, and Queen and Evelyn make a fantastic pair in their new and emerging friendship. Even when Evelyn's mother tries to get a gender-conforming gift for Queen's birthday party, Queen defies masculine stereotypes. I've heard people refer to Queen as a gay boy, or even a trans boy, but there is nothing in the book to infer such identities. His nonconformity is a matter of expression of himself, not a matter of conforming to a gay stereotype or a stereotype of femininity. And that is what makes this book so remarkable.

Popular posts from this blog

Swanee is dead. She suffered a sudden heart attack while practicing for track and field. Left behind is her girlfriend Alix, who is devastated and lives in denial for a brief period of time before things start to unravel. When she goes to Swan's house to offer condolences, Alix finds Swan's phone and notices a series of texts from someone with the initials LT. And LT seems to think that she  was Swan's girlfriend. Alix manages to piece things together and finds out that LT is actually a girl named Liana who really was dating Swan. In a moment of irrationality, Alix texts the girl as if she is Swan, but it's already two weeks since Swan has died, and Liana still has no idea. Soon Alix's conscience kicks in and she confronts Liana in person to try to straighten things out. As the two girls try to overcome feelings of anger, frustration, and betrayal, they also start to see in each other some of the qualities they never found in Swan, and thus, the relationship begin
Read more

Luke feels like he’s been looking after Toby his entire life. He patches Toby up when Toby’s father, a drunk and a petty criminal, beats on him, he gives him a place to stay, and he diffuses the situation at school when wise-cracking Toby inevitably gets into fights. Someday, Luke and Toby will leave this small town, riding the tails of Luke’s wrestling scholarship, and never look back. But during their senior year, they begin to drift apart. Luke is dealing with his unreliable mother and her new boyfriend. And Toby unwittingly begins to get drawn into his father’s world, and falls for an older woman. All their long-held dreams seem to be unraveling. This book is a lot of things. It is difficult to read, but it is worth reading for some many reasons. Bliss's narrative is like a well-intentioned punch in the gut (if that makes any sense... it does to me...) We'll Fly Away  is about love and family, hopefulness and hopelessness, friendship and sex, crime and consequences
Read more

Yeah, yeah, I know, I'm WAAAY behind on reviewing this title. But now that I've had a chance to get to some books that I want  to read as opposed to those that I have  to read, I had the chance to read this gorgeous book! In case you haven't heard about it everywhere (it just won this little award called the Newbery!), here's a synopsis, courtesy of the interwebz: "With a bolt of lightning on my kicks . . .The court is SIZZLING. My sweat is DRIZZLING. Stop all that quivering. Cuz tonight I'm delivering," announces dread-locked, 12-year old Josh Bell. He and his twin brother Jordan are awesome on the court. But Josh has more than basketball in his blood, he's got mad beats, too, that tell his family's story in verse, in this fast and furious middle grade novel of family and brotherhood.   Josh and Jordan must come to grips with growing up on and off the court to realize breaking the rules comes at a terrible price, as their story's heart
Read more

Rob Bittner
I have a PhD in Gender, Sexuality, and Women's Studies. I like books (perhaps a bit too much) and I find people odd. I want to understand things and children's literature helps me to do just that.